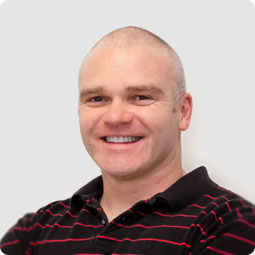 Jude Spiers completed his Bachelor of Science in Physical Therapy at the University of Alberta in 1995.  He started work in a sports PT clinic in Calgary, AB before relocating to his native New Zealand in 1996.  While working in private practice at Mount Maunganui, he was invited to present a number of lecture series to the Bay of Plenty Secondary Schools Sports Association and later accepted an academic staff member role with the Bay of Plenty Polytechnic in their Department of Sports and Leisure.

He moved into a full-time team physiotherapy role with the professional National Rugby League (NRL) team, the Vodafone Warriors.  He spent a decade associated with the team as they improved from the lower ranks to regular finalists and accompanied them to their first Grand Final appearance.  He also provided physiotherapy support to NZ’s National Rugby League team, the Kiwis, in test match competitions against Australia.  Jude continued his academic pursuits during this time, completing his Post-Graduate Diploma in Health Science – Musculoskeletal Physiotherapy at Auckland University of Technology.  He assisted with workshop delivery on the University of Auckland’s School of Medicine Post Graduate Diploma in Sports Medicine course and was an Auckland University of Technology lecturer in musculoskeletal physiotherapy.  He has been an invited speaker at Sport Medicine New Zealand Branch and National Conferences, presenting on rehabilitation strategies in professional rugby league, athlete monitoring and optimizing performance.

Jude joined the Kinsmen Sport Centre Physical Therapy team on one of his extended returns to visit friends and family in Edmonton.  Bouncing back and forth across the globe with his best-beloved (Olivia, a New Zealander herself), he then took on a clinic management role (again at “the Mount”) that also allowed him to work as a team physio for the Bay of Plenty Provincial Rugby Sevens side.  Moving north, he accepted an opportunity with High Performance Sport New Zealand, the government organisation tasked with supporting NZ’s top athletes.  While he provided physiotherapy services to athletes across several sports (including Rowing, Cycling, Field Hockey, Snow Sports, Rugby Sevens, Triathlon, Athletics & Equestrian) at HPSNZ’s two national centres, his main team role was with the National Women’s Sprint Kayak K4 Team.  He had the great pleasure of joining the kayakers at the Rio Olympic Games as they fought their way through to the finals in their maiden effort. In a rare “Olympic Double” permitted by the lengthy Olympic schedule, Jude also served as the NZ Sailing Team’s physiotherapist, as they won 4 medals (1 Gold, 2 Silvers and a Bronze).  He continued to work with the Kayak Team through to the 2017 World Championships as they improved on their Olympic performances, claiming 4 medals (2 Golds, 1 Silver and 1 Bronze).  Jude has recently relocated to the United Kingdom, where he has accepted a role with the English Institute of Sport and is currently supporting the British Sprint Canoe & Kayak Teams as they prepare for the upcoming Olympic Games scheduled for Tokyo.

While Jude’s experience is primarily in the high performance training and rehabilitation arenas, he applies the same goal oriented principles used in elite sport injury management to assist all his clients, be they recreational or aspiring athletes or non-sporting members of the public.

Jude is currently on sabbatical from the Kinsmen Sports Centre Physical Therapy Clinic.  He continues to travel the world in search of new professional experiences and personal adventures (most of which involve an old Land Rover, an even older map and a very patient Olivia).  He encourages all his past clients to consult one of his colleagues at the Clinic in his absence.